The lesson is suitable for students in grade 6 through adult.

Visit any exhibit of artifacts from the tombs of ancient Egypt, and you cannot help but notice the distinctive style that ancient Egyptians’ used to draw people. Their style has several distinguishing features that remained constant for almost 2000 years.

The problem in this lesson is learn to use the same grid that Aneicnt Egyptians used to draw people.

This lesson includes both POWERPOINT and VIDEO versions of the lesson plus 2 downloadable printouts: a warmup and a grid with the Egyptian figure.

Science: Study the enormous scale of Egyptian architecture, and learn what tools they used to build their monuments. Their carvings and paintings did not decompose significantly, even though they are about 4000 years old. Find out why. Here's a website to get you started.

Math: Egyptians measured things in cubits (the distance from the elbow to the tip of the fingers).  A cubit was 6 hands long, and a man was considered to be 3 cubits tall.  Find the proportions of the head, the arm, or the legs to the whole body, and then compare the Egyptian proportions to the proportions of your own body. 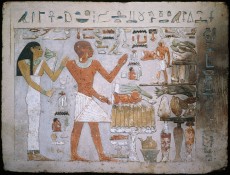