Learn to imitate the American primitive style of art.

The lesson is suitable for students in grade 7 through adult.

If you drive through the part of almost any American community that was built around the turn of the 20th Century, you will be almost certain to find a charming Queen Anne style house.  They are easy to spot: the wrap-around porch with columns and spindles, the cantilevered second story, and the use of a variety of textures on the outside walls are some of the identifying marks.  Since they are often painted in three or more colors, you probably also know them as “painted ladies.”

This art lesson will help you identify and draw this style of home, but we thought it would be even more interesting to combine the architectural art of the period with the work of one of the most famous American artists of the period: Grandma Moses.  This lesson combines Queen Anne architecture and Grandma Moses’ primitive art style to let the student create a picture of an ideal world where everything is peaceful, happy, and harmonious.

The drawing for this mixed media lesson is done with colored pencils; we finish it with watercolors.

This lesson includes both POWERPOINT and VIDEO versions of the lesson plus 2 downloadable printouts: a warmup and a drawing of the house. 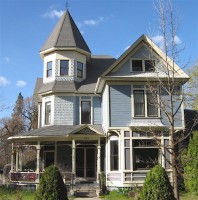